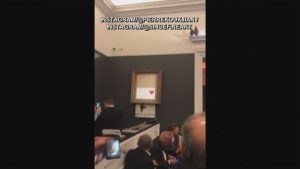 LONDON, England (RTV/NBCNC) – The woman that shelled out more than a million dollars for a Banksy painting that shredded itself after it sold at auction says she’ll keep the piece.

Banksy, the anonymous artist, released a video showing how he built a shredder into the painting so he could destroy it if it was ever auctioned. And he kept true to his word and shredded the painting the moment it was auctioned off at Sotheby’s a few days ago.

Onlookers gasped, others laughed while Sotheby’s employees glumly removed the shredded painting called “A Girl with a Balloon.” It was one of Banksy’s most well-known works.

The woman who bought it, who wishes to remain anonymous, paid $1.38 million for it.

Some art critics said the shredding was an excellent example of performance art and the shredded painting is now worth more than the purchase price.

Banksy gave Sotheby’s a certificate of authenticity and after destroying it, gave it a new name: “Love is in the Bin.”