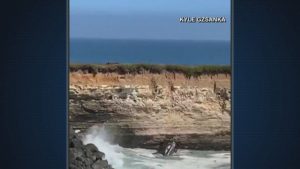 SANTA CRUZ, Calif. (NBC) – A man is in custody after crashing a car over a California cliff.

Authorities looked over the cliff in Santa Cruz Tuesday afternoon as the car is caught in the surf below.

According to the sheriff’s office, deputies responded to reports of a man shooting a handgun near Davenport.

Deputies gave chase after they say the man sped off in a vehicle he carjacked.

The pursuit, reaching speeds of up to 100 miles-per-hour, ended at West Cliff Drive where the car went into the ocean near Stockton Avenue.

Witnesses say the man climbed out of the driver’s window of the car, made his way up the rocks with his hands up, and was taken into custody.

No word on what charges he faces.