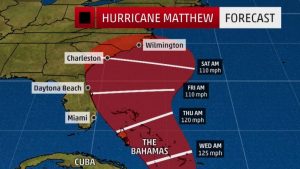 (NBC News) — A strengthening Hurricane Matthew, with winds peaking at more than 150 miles an hour, is taking aim at the Caribbean.

The water is already knee-deep in Jamaica and more is on the way. Haiti, Columbia and Aruba are feeling the effects of Matthew as well, and Cuba is likely next. More than half-a-million there are bracing for the storm.

“The threat from the heavy rainfall that could induce flash floods and mudslides is an extremely grave concern,” warns Dr. Rick Knabb of the National Hurricane Center.

Florida and the Southeast coast of the United States could feel the brunt of the storm later in the week.

It’s still too early for a definitive track, but not too early to prepare.

“If Matthew directly impacted Florida the destruction could be catastrophic. Just think about it. We haven’t something like this on the East Coast in a long time,” Florida Governor Rick Scott warned Monday.