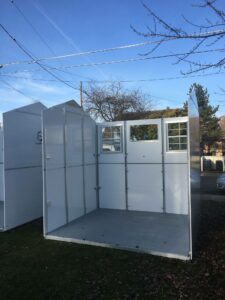 ASHLAND, Ore. — The city of Ashland announced Tuesday it has opened pallet shelters.

According to the city, it’s been coordinating with local and regional providers to address the issue of emergency cold weather shelters.

Because of Covid-19 social distancing restrictions, the city says it’s been working to open something that is safe for both shelter participants and volunteers.

The city says it’s hoping to explore more funding opportunities to expand the shelters in the community.