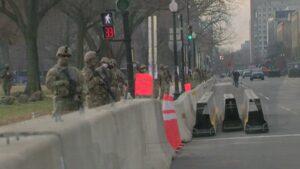 WASHINGTON, D.C. (NBC) – There are now physical signs to show that security in D.C. is tightening in anticipation of the upcoming inauguration.

Workers are continuing to add the final touches to the inauguration stage at the U.S. Capitol. They are adorning the stage with patriotic images of banners and flags. But, there are also the images of increased security—signs telling people the area around the Capitol complex is closed to the public.

Security personnel, like the D.C. fire department, are having meetings on-site to go over procedures and large, metal gates surround the entire capitol complex to provide a protective barrier from the public.

On Monday, President-elect Biden said he is not afraid to have the inauguration scheduled for Wednesday, January 20th outside.