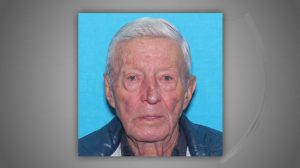 Ashland, Ore. – An 86-year-old man with dementia has been reported missing from his Ashland home, according to the Jackson County Sheriff’s Office.

Deputies said Harold Hardesty was last seen Monday leaving his home in the 1200 block of Oak Street on foot.

Deputies are asking the public for any information about his whereabouts.

JSCO said more information will be released as it becomes available.