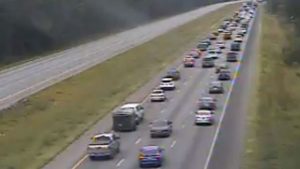 (NBC News) — Hurricane Matthew, the strongest Atlantic hurricane in nearly a decade, is inching closer toward the United States after delivering a devastating blow to Haiti.

The storm is already being blamed for eleven deaths in the Caribbean.

In South Carolina, bumper to bumper traffic lines the interstate out of Charleston and surrounding areas, with the rush on supplies and gasoline serving as an indication those in the strike zone are heeding the warnings.

Following the governor’s order Tuesday, more than a quarter million people have been told to leave immediately, with the rest of the state’s coastline now on notice to evacuate Thursday.

Hundreds of buses are being moved in to assist.