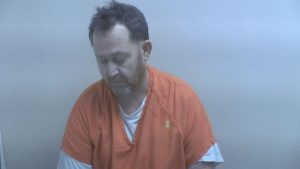 MEDFORD, Ore. — A man accused of setting fire to a home last week made his first appearance in court Monday.

The incident happened late last Thursday night, as crews put out a fire on the 2500 block of Happy Valley Drive.

Neighbors told NBC5 News they caught a man at the scene on their security camera, but police couldn’t identify the man because of partially blocked views and darkness.

The next day, police found a burned steel shed on the property and Day inside.

They say Day threatened officers with a firearm; a swat team had to be called in.

After about four and a half hours, police arrested Day by force.