PORTLAND, Ore. (KGW) — A father and son from Battle Ground are set to accept plea deals with federal prosecutors for their alleged role in the January 6 attack on the U.S. Capitol. Jeff and Jeremy Grace appeared in selfie-style photos both inside and outside the Capitol Building during the insurrection, according to prosecutors.

On April 8, Jeremy Grace pleaded guilty to one count of Entering and Remaining in a Restricted Building or Grounds. As part of the plea deal, federal prosecutors agreed to drop three additional charges.

Jeremy Grace will likely receive a sentence ranging from zero to six months in prison, along with a fine from $500 to $9,500, according to court records. A federal judge will impose sentencing at a hearing on July 8.

Court records show Jeremy Grace has also agreed to cooperate with investigators, allowing federal agents to review any social media accounts active in and around January 6, 2021.

RELATED: Father and son from Battle Ground charged in US Capitol riot

Grace’s father, Jeff, is scheduled for a plea hearing on June 17. Jeff Grace is facing similar charges related to the Capitol breach.

In a March 2021 interview with KGW, Jeff Grace falsely claimed that he didn’t take any photos or videos inside the Capitol Building. He also denied that his son Jeremy entered the federal building.

Jeff and Jeremy Grace can be seen posing together in photos and video inside and outside the U.S. Capitol during the insurrection. Federal agents claim both men tried to delete the selfie-style videos. 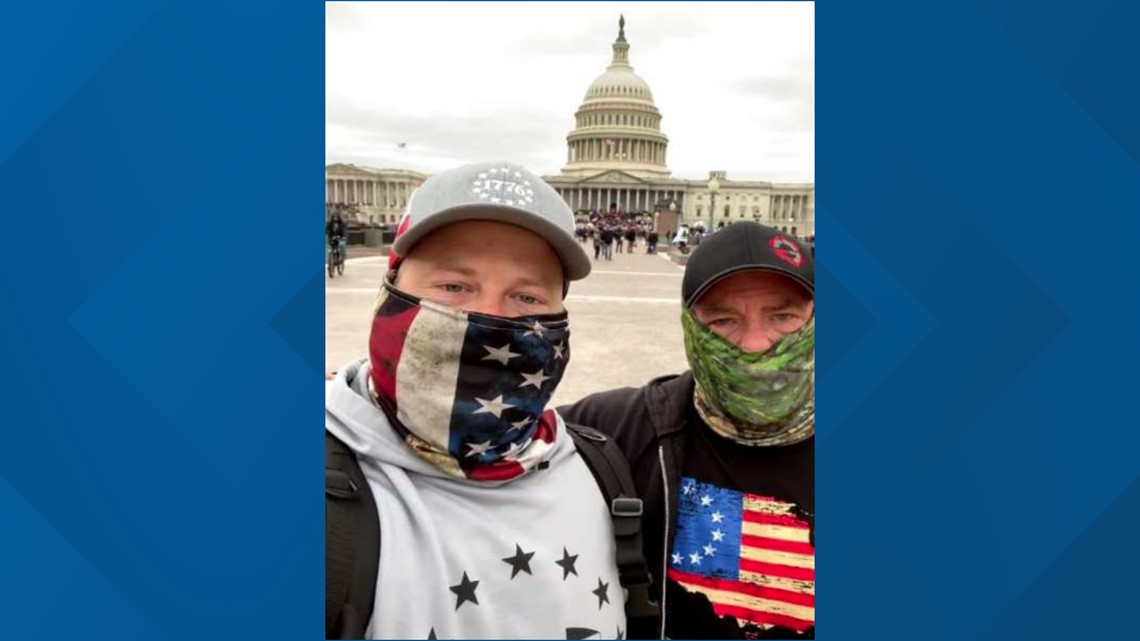 In August 2021, a federal judge ordered Jeff Grace to surrender any guns and weapons while awaiting trial after he showed up armed during what prosecutors described as pre-planned confrontations in Portland and El Paso.

KGW was unsuccessful in reaching Jeff or Jeremy Grace for comment.

Six other people from Oregon and Southwest Washington have also been charged in relation to the January 6 attack on the U.S. Capitol.

Two Oregon brothers, Matthew and Jonathanpeter Klein, face multiple federal charges for their involvement in the insurrection. Photos provided by the Department of Justice show the Kleins inside the Capitol building on January 6.

According to court papers, Jonathanpeter Klein is a self-identified member of the far-right Proud Boys. The Klein brothers pleaded not guilty. Their next court date is June 28.

Federal prosecutors also relied on images taken from videos and social media to help build a case against Richard Harris. He is facing various charges related to the insurrection, including assaulting an officer. Harris agreed to live at his father’s home in Happy Valley while awaiting trial on September 26.

The FBI also used surveillance and body-worn camera footage to help identify a 63-year-old Hillsboro man who allegedly took part in the insurrection. Reed Christensen is facing multiple charges in connection with the takeover of the Capitol after allegedly striking and pushing officers.

The U.S. Army veteran and former Intel employee’s next court date is June 30.

Jeffrey Hubbard of Lincoln City was captured on surveillance video storming the Capitol on January 6, according to federal prosecutors. Hubbard has a status conference scheduled for June 28.

Tipsters alerted the FBI about Marc Bru of Vancouver, according to court documents. Bru is accused of breaching the U.S. Capitol and is due in court next month for a status conference.

The U.S. Justice Department has charged more than 800 people with crimes related to the deadly assault on January 6, 2021.