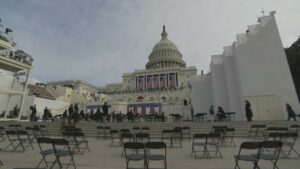 WASHINGTON, D.C. (NBC News) – Final preparations are underway for an inauguration day like no other.

“We are not taking any chances,” said Maj. Gen. William Walker, the Commanding General of the D.C. National Guard. “This is three times the number of guardsmen we would normally have in support of the United States Secret Service.”

For the first time in more than 150 years, the outgoing president will not attend his successor’s swearing-in. President Trump is now planning to leave Washington with a sendoff ceremony on the morning of President-Elect Joe Biden’s inauguration. Officials say he plans to land in Florida on Wednesday before Biden takes the oath of office.

While moving trucks arrive at Mar-a-Lago, the president’s post-White House home, Trump is reportedly strategizing his defense for a second impeachment trial. He’s also weighing pardons, potentially for himself, his family members and top advisors.

Meanwhile, President-Elect Biden spent this Martin Luther King Day of service loading food boxes in Philadelphia, while looking ahead to his top priorities. Biden has promised a series of executive actions and has proposed a nearly $2 trillion emergency COVID relief package.

The incoming administration is hoping Congress will place Biden’s urgent agenda on a parallel fast track with the impeachment of the former president.