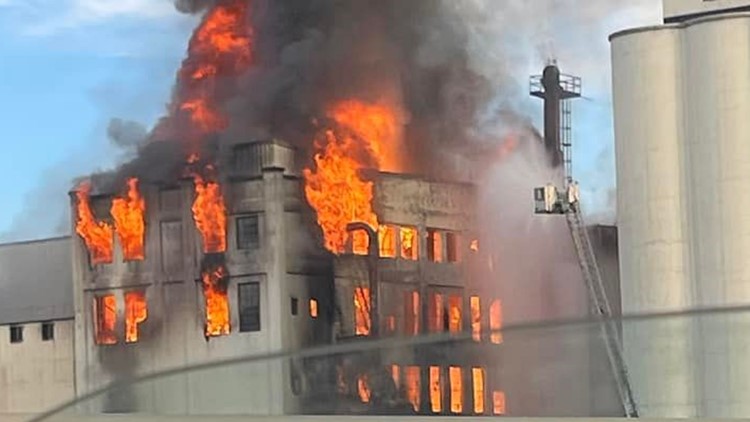 PENDLETON, Ore. — Firefighters battled a fire that destroyed a building at Pendleton Flour Mills in eastern Oregon. No injuries were reported.

The Pendleton Police Department asked people to stay away from the mill near Southeast Emigrant Avenue and Southeast 6th Street Wednesday morning.

Dispatchers received a report of black smoke coming from the mill on Aug. 9 at 2:55 p.m. Crews with the Pendleton Fire Department extinguished a small fire and remained on scene to monitor the situation. The fire reignited around 4 a.m. and destroyed a building due to dry grain and a wooden structure inside, police said.

As of 10:55 a.m., Pendleton police said crews were able to knock down the flames and were focused on monitoring hot spots. A total of eight agencies are assisting the Pendleton Fire Department.

“Although the building is a total loss, this will be an ongoing emergent situation due to the amount of grain that is [slowly] burning,” said Pendleton Police Chief Chuck Byram in a news release.

Byram said first responders are confident that the fire has not spread to any other building on the property.

Fire officials have not released the cause of the fire.

The nearby courthouse is closed and state court operations have moved to the courthouse in Hermiston, according to the Umatilla County Sheriff’s Office.

The Pendleton Flour Mills is owned by Grain Craft, which is the largest independent flour milling company in the country, according to its website.

KGW has reached out to Grain Craft for a statement, but has not heard back.