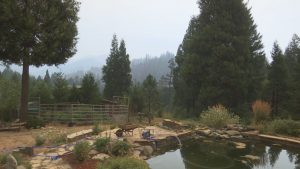 ROGUE RIVER, Ore. — The Garner Complex is the largest burning fire in Southern Oregon right now. The 25,000 acre complex is made up of several lightning caused fired from a storm that came through on July 15th.

While fire crews continue to try to get a handle on the flames, come firefighters are dedicating their time to protecting homes. In some cases, they’re using an unconventional source to create defensible space.

David Walters has live in his home for 12 years but he says he’s never seen a fire this close to home.

“It’s been touch and go, the fire was marching down on us a mile and a quarter for a couple days and the wind was just howling,” Walters said.

He lives in the woods outside of Rogue River, his home is just a quarter of a mile from where the Garner Complex fire is burning.

“I mean it’s 2 thousand feet away … and i cant do anything but praise all the effort that has arrived right here,” he said.

Fire crews say the closer homes are to forested areas like where he lives, the greater the need for defensible space. Defensible space, is part of the reason Walters built a pond in his backyard two years ago.

Now, Walters home is in a level three evacuation zone and firefighters are able to protect his home using his new pond.

“So this is a home that we can come up here if the fires approaching, turn on this pump, let the sprinklers wet down all the defensible space and we can continue to the next home,” Captain Cole Van Essen said.

The sprinkler system is simple, all firefighter have to do is turn on the motor and water gets pumped from the pond into a sprinkler like system.

Captain Cole Van Essen says he sees many homes in rural ares that have ponds or other types of water supplies like these.

When homeowners do have bodies of waters like these, it allows firefighters to quickly protect them, before moving on to other homes down the road.