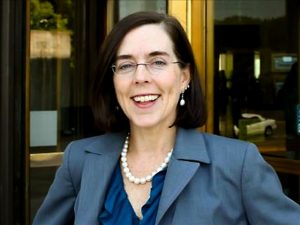 Portland, Ore. – Oregon Governor Kate Brown announced a new plan to address gun violence in Oregon and across the country.

The order also directs OSP to report to local law enforcement agencies when a prohibited person tries to obtain a firearm and the transaction is denied.

The Oregon Health Authority is also directed to determine whether it receives enough data to study the effects of gun violence and suicide in Oregon.

“Since I was sworn in as Governor 17 months ago, more than 600 Oregonians have died from violence inflicted by a gun,” Governor Brown said. “Violence answers nothing, offers nothing, solves nothing. If we want to end violence, we must instill hope and create opportunity. I call on each of us, as Oregonians and as Americans, to join this call to end gun violence now.”

“Every day in the United States, 22 people die from homicidal gun violence,” Governor Brown said. “I urge Congress to ban assault weapons and strengthen anti-terrorist legislation by passing the common sense ‘No Fly, No Buy’ ban.”

You can read a transcript of Gov. Brown’s remarks HERE.