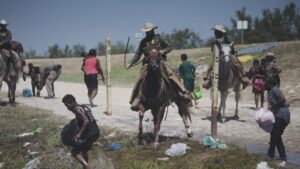 Thousands of migrants have gathered in a temporary site under the Del Rio International Bridge in Texas as they wait to be processed by U.S. immigration authorities.

Videos taken by al Jazeera and Reuters appear to show law enforcement officers on horseback swinging long reins near them.

In one video, an officer’s horse nearly charges into a migrant who falls back into the water.

In another, a person on horseback was heard yelling profanity at the migrants.

“Any mistreatment or abuse of a migrant is unacceptable, is against Border Patrol policy, training and our department’s values,” Mayorkas said. “Indeed, we have a directed investigation. That investigation is underway and it will be conducted swiftly and the public needs and deserves to know its results. I also have directed that the Office of Professional Responsibility be on-site in Del Rio full time. We will not tolerate any mistreatment of an individual.”

Mayorkas said some 4,000 migrants have been moved from under the bridge to other processing centers. He expects even more movement in the next few days.