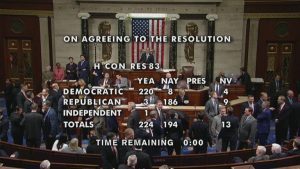 WASHINGTON, D.C. – As the House passed a  measure limiting President Trump’s power to take military action against Iran, members of both parties are venting frustration about the administration’s refusal to prove why it took out a top Iranian general.

Lawmakers debated the issue today over whether to check the president’s military powers. Republicans say that questioning his actions weakens America while Democrats argue staying silent would hurt the constitution.

Thursday night, Democrats sent a signal to President Trump as the House passed a largely symbolic resolution demanding he seek congressional approval before taking any further military action in Iran.

The final votes fell mostly down party lines with Democrats distrusting and dissatisfied with the Trump Administration’s strategy.

House Speaker Nancy Pelosi (D-CA) said, “The administration conducted a provocative, disproportionate air strike against Iran which endangered Americans and did so without consulting Congress.”

President Trump signaled he wants to de-escalate with Iran while at the same time insisting he doesn’t need congressional approval to act militarily despite the decades-old War Powers Act.

“I don’t have to,” the president said. “And you shouldn’t have to be able ‘cause you have to make split-second decisions sometimes.”

Democrats and some Republicans were frustrated by a White House briefing Wednesday, saying the administration didn’t give a clear reason for killing Iran’s top general Qasem Soleimani.

Rep. Jamie Raskin (D- MD) said, “The president has still not given us a single justification for why he did it.”

Rep. Michael McCaul (R- TX) stated, “It should be clear to any reasonable person that Soleimani posed a long-term threat.”

Iran retaliated with missile strikes against U.S. forces in Iraq. No one was hurt.

Hours after that attack a Ukrainian jetliner crashed shortly after taking off from Tehran killing all 176 people on board.

While Iran blamed mechanical failure, U.S. officials tell NBC News evidence from an American spy satellite suggests Iranian missiles shot down that plane which may have been mistaken for a threat. “An example of what can happen during the fog of war,” Sen. Chris Van Hollen (D-MD) said.

The war powers resolution is non-binding, meaning it won’t go to President Trump to be signed into law.

Speaker Pelosi said she didn’t want him to diminish the statement from Congress with a veto.