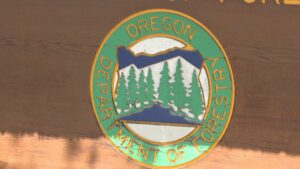 OREGON- When a wildfire starts, people quickly look for answers on what or who caused it. But according to Oregon Department of Forestry, it can take years to reveal that information to the public.

And quite often, it doesn’t result in criminal charges- just mostly fines.

When a wildfire is started by lightning, it can be easily traced back to the source of the strike and ruled the cause.  But when fires are human caused, which a majority of wildfires started in Oregon are, a much more complicated task begins.

“It’s a process and we want to make sure that as we go through the processes, and that the details and accuracy of the investigation is the priority,” said Dave Larsen. He is the southern Oregon area director for ODF and is also a fire investigator.

He says part of an investigation is figuring out intent. That determines the penalties someone responsible for starting a fire faces.

“We have to also consider: was it willful, malicious, or negligent in causing the fire,” Larsen said.  The person responsible would likely have to pay back the cost of fighting the fire, and sometimes, any resulting losses.

“If it is a very expensive fire, say it costs thirty million for the cost of suppression, that’s going to litigation and courts. So we need to make sure, in order to recover potential damages and liabilities, we have to make sure our cases are really solid and goes through a review process,” explained Larsen. The review process passes through the district forester and then heads up to Salem.

That’s where ODF’s lead investigators come in, like Neal Miller.

“To make sure we’ve done a complete and throughout investigation, it just takes time. There’s a lot of documents to review, people we need to follow up with and talk with, and making sure we have everything in line to pursue cost,” Miller explained.

The the bill for fire fighting efforts comes on top of local fines and possible misdemeanors.

“If a case is more expensive or more complex, that’s when they reach out to our Salem office and that’s when we can bill directly after we demand for cost if those are are not followed through with. And then at that time we can file suit,” Miller said.

Larsen says arson cases are a small part of human-caused fires, but when it happens ODF works with local law enforcement or the Department of Justice.

“In coordination with Oregon State Police and the sheriff’s office and whoever has the jurisdiction there. Just like any criminal case, we have to protect the integrity [of the case.]” Larsen said.

Both investigators understand the public’s desire to know the cause and resulting penalties from destructive wildfires, especially if people lose their homes or lives.  They are just asking for time, so they can do every investigation justice.

“It can be done in a day or two, and in some of our larger cases, it can be years,” Miller said.

ODF says being able to tell the public how and why a fire started also helps with prevention efforts since it can educate others on how to avoid starts of their own.