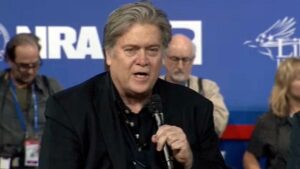 Bannon, a former adviser to the former president, has refused to comply with a congressional subpoena. He was supposed to appear before the committee for a deposition Thursday.

The committee chairman said Bannon is hiding behind Trump’s claims of executive privilege, even though Trump is no longer president.

Three other Trump allies also have subpoena deadlines this week.

The panel says two of them, Trump’s former Chief of Staff Mark Meadows and former administration official Kash Patel, have been “engaging” with the committee. However, it’s not clear if that amounts to cooperation.

Multiple sources familiar with the plans say Patel is not expected to appear for his Thursday deposition with the committee.