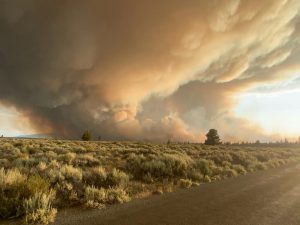 MODOC NATIONAL FOREST, Calif. – There are now over a dozen active fires in the Modoc National Forest.

One of the fires, the Caldwell Fire, was actively growing at 7,903 acres with a large plume of smoke visible from along distance. The fire prompted the complete closure and evacuation of the Lava Beds National Monument along with Forest Service roads in the area around Medicine Lake.

The Dalton and Lone Fires were also active Thursday, growing to a combined estimate of 2,500 acres. No evacuations are associated with the two fires, which were lined with retardant.

According to the Modoc National Forest, the Allen Fire is approximately 800 acres and is holding along County Road 85.

The fires were started by lightning on July 22.