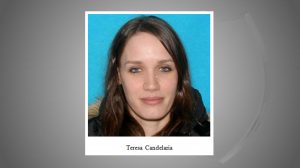 Update (04/04/17 10:00 a.m.) — The Klamath County Sheriff’s Office said Teresa Candelaria is believed to be voluntarily outside the state of Oregon.

Deputies said they spoke to one of Candelaria’s family members who reportedly contacted her by phone.

In addition, KCSO detectives spoke by telephone to a woman who claimed to be Candelaria. She was encouraged to contact a local law enforcement agency to confirm her identity and well-being.

Once the information is received by Klamath County authorities, the missing person case will be closed.

Klamath County, Ore. — Police are looking for a woman who was reported missing by her family on Sunday.

Police said her 1994 blue Chevrolet Suburban was found in an Albertson’s parking lot with her keys, purse and cell phone still inside the vehicle. She also missed an appointment regarding her children that was scheduled for Monday morning.

According to deputies, there is no evidence of foul play yet, but the “nature of her absence is concerning.”