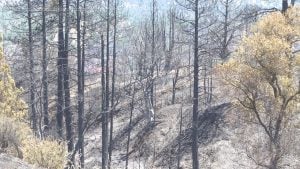 Yreka, Calif. — As containment on the Klamathon Fire grows, personnel on the fire lines are heading home. At its peak, the fire had nearly 3,000 people on the lines and at base camp.

This morning, it reported having just under 2,300 people working the fire. While Thursday was the first in a series of triple-digit days ahead, Cal Fire said it’s all planned for.

The fire is 70% contained, as of Thursday night. Officials said crews are on track to get the fire 100% percent containment by Sunday.