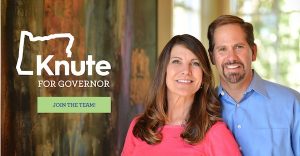 Bend, Ore.- In an email to the media and supporters, Bend Republican representative Knute Buehler announced he will run for Governor and promises, if elected, he will “lead Oregon with courage, an open mind, a tolerant heart and a thoughtful voice.”

In the first line of the email, Buehler made it clear he doesn’t have faith in current governor Kate Brown’s governance. The email states, under Kate Brown, “Oregon is falling behind and too many Oregonians have an uncertain future.” Buehler specifically mentioned high school graduation and drop out rates.

In addition to launching his gubernatorial race, Buehler also launched his campaign, stating:

I will restore fiscal sanity to Oregon’s budget – controlling runaway spending instead of demanding higher and higher taxes from hardworking families and small businesses.

Buehler grew up in Roseburg and earned a degree at Oregon State University. He attended medical school, then settled in Bend where he opened medical practices. In 2014, he was elected representative for District 54 in Bend.

The governor’s race won’t be the first time Buehler and Brown have gone head to head for votes. In 2012, Brown beat out Buehler to become Oregon’s Secretary of State.