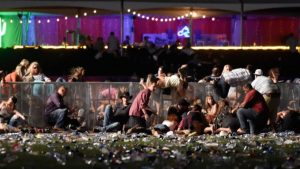 It was the worst mass shooting in modern American history.

The shooter, who was identified by law enforcement officials as Stephen Craig Paddock, 64, of Mesquite, Nevada, fired shot after shot from the Mandalay Bay Resort and Casino down on the crowd of about 22,000, sending terrified concertgoers running for their lives.

She added: “People kept dropping and dropping … People were getting shot one foot away from us. People were trying to save their friends. There were gunshots everywhere. Helping them would’ve meant that we got shot, too.”