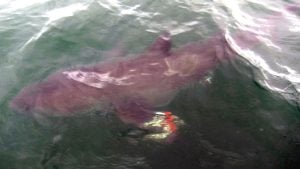 Orleans, Mass. (WHDH) — A six-year-old boy from Houston caught a Great White Shark while fishing off the coast of Cape Cod Sunday afternoon.

Blake White was holding the fishing rod on his grandfather’s boat when he felt a huge tug.

“Well, I did pass the rod to my dad because it was too heavy,” Blake says.

The shark was caught for 90 minutes, until Blake’s dad cut him loose.