EAGLE POINT, Ore.- A suspect in a home invasion robbery in Eagle Point late last night is still on the loose. Police say they arrived on scene, as it was happening… And within hours… Had two people in custody. Police tell NBC5 News the crime scene -a marijuana grow- is a popular target this time of year.

Thursday night around 9 p.m., several local agencies responded to a home invasion robbery in progress on Highway 140 in Eagle Point.

“They showed up to a robbery in progress, so they were able to foil that crime,” said Jackson County Sheriff’s Aaron Lewis.

When police arrived, they were able to arrest one suspect and later detained another, after they were spotted trying to hitchhike hours later.* A third is still on the run and considered armed and dangerous.

“The two suspects that are in custody will be booked and charged, and we’re just out looking for the remaining suspect,” Lewis said. The crime scene was at a marijuana grow warehouse.

“The folks on the property were all workers, and they were the ones that were attacked by the suspects,” Lewis explained, saying suspects were also facing assault charges. He added that the workers had minor injuries.  JCSO says these types of grows are a big target this time of year as they sometimes amass both product and cash on site.

Oregon’s U.S. senators have long lobbied the federal government to get legal growers access to the banking system. Because marijuana is still illegal at the federal level, banks aren’t fully open to them, so growers are forced to be a cash business.

“You could be target of this sort of violent crime, a home invasion, a robbery, assault. It’s an added danger at the end of this grow season,” Lewis said. Police later confirmed that the Eagle Point grow and processing site contained illegal marijuana.

“Once we get close to harvest, usually starting in September and until the dry rooms are completely done, we do take security to an extra level,” he explained. He keeps cameras across his property and has multiple guard animals. He and the growers around him also keep track of every car and truck that comes through, and will communicate about experiences they’ve had.

He says a robbery like Thursday in Eagle Point shakes his sense of security- he lives with his family on the property where he grows. He says theft like that could have major financial impacts.

“The state of the market we are in right now, prices aren’t great. So to lose a crop… it would be devastating. It would probably knock us out of business,” Gooding explained. He says he knows law enforcement has a lot on their plate with local marijuana enforcement, so keeping legal grows like his safe and secure is often left up to growers themselves.

“They’re doing the best they can – but they can only do so much.”

*UPDATE: Just before 6 p.m., the sheriff’s office identified the two suspects in custody. 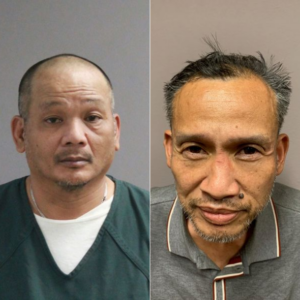