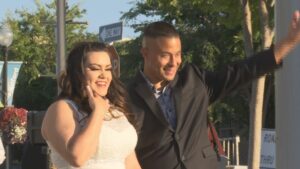 MEDFORD, Ore – It’s not every day an open wedding is held in downtown Medford.

It’s rarer that a wedding hosts a free concert.

This evening, a free concert and wedding celebration were hosted at Pear Blossom Park.

It began at 4 p-m and lasted till 10 p-m… With a wedding ceremony held at around 7:30 p-m for Jovita and Masao Williams.

They planned to wed last year, but the pandemic put those plans on ice.

As Oregon starts to open up, the newlyweds decided to hold a public wedding and concert to give back to the community.

“I know a lot of people’s lives have been affected,” said Masao Williams, the event’s organizer & groom. “So, you know, we’re just thankful for everything that we do have and thankful for the friends that are here.”

“I’m just excited to show people here in Oregon who I am, and what I’ve been doing for so many years.” the bride and singer, Jovita Enriquez, told NBC5.

There were also food vendors for people to grab food.