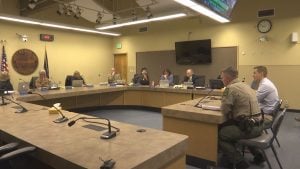 ASHLAND, Ore. — As Ashland City Councilors were expected to make a key vote in a new jail proposal Tuesday night, once more, no decision was made.

Sheriff Nathan Sickler presented the proposal for an 800-bed jail to councilors again but councilors decided to table the discussion saying they need more clarity.

It was ultimately decided that the city council wanted to discuss further with county officials. They want to know more about mental health services that would be provided under the new jail proposal.

The current jail was built in 1981. Law enforcement says it’s overcrowded. To fund the new facility, it would require a countywide tax district.

“We’re kind of in a holding pattern and hopefully they’ll have some questions answered over the next two weeks and be able to make a decision that obviously I hope that they’ll support this going to the voters and let the people decide what’s going to happen with this project,” said Sheriff Sickler with Jackson County Sheriff’s Office.

He said all the information must be presented before the board of commissioners by January 2nd or the project will be delayed for another six months, meaning it wouldn’t be on the May ballot. Additionally, he said the cost would go up another $4.3 million if not approved.

Ashland City Councilors said they’re hoping to discuss with city officials and are hoping to come to a decision at their meeting on December 3rd.