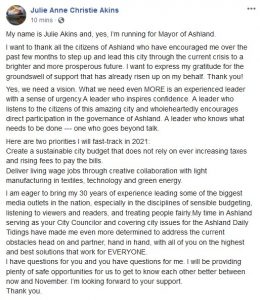 She says her two priorities for the city in 2021 include creating a city budget that doesn’t rely on increasing taxes and fees, as well as adding living wage jobs through collaboration with
manufacturing in textiles, technology and green energy.

Akins says she will also look to provide safe opportunities for community members to get to know her between now and November.