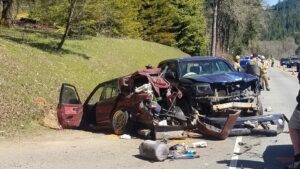 According to OSP, a 17-year-old was driving a Toyota Tacoma southbound around 12:30 p.m. on March 26. Investigators said they hit the back of a stopped Honda Civic, which was then pushed into a Dodge Dart, hitting it.

The infant in the Honda Civic was taken to Asante Rogue Regional Medical Center in Medford and transferred to OHSU in Portland. OSP said the infant was later pronounced dead.

Rural Metro Fire Department said six other passengers were involved but were not injured.