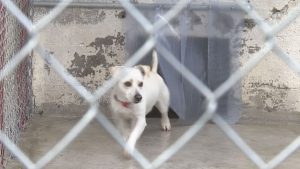 You know what they say, out with the old and in with the new.

But in this case, we’re talking dogs.

Some owners actually surrender their older dogs to shelters to make room for a new Christmas puppy.

The Southern Oregon Humane Society said it’s not too uncommon, but they say instead of surrendering them, trying to find them a new home instead is always better.

“There are a lot of Facebook pages, there’s a lot of websites for pet re-homing,” said SO Humane Adoption Specialist Cierra Johnson, “so that the animal can be adopted out from one home to another, without having to come in to a shelter environment for any point of time.”

SO Humane said dogs usually stay in their shelters for two weeks before getting adopted, and said that they try to make that time the most enjoyable and positive as possible.

We know the stress of the holidays, and they can also be stressful for our pets.

SO Humane said the fast-paced environment of the holidays combined with a lot of new faces and new things can be so stressful that dogs are more likely to bite.

They said they often see dogs surrendered because of one-time biting.

“There’s always going to be a breaking point for every animal if the owner is not able to read the signs that the dog is scared and needs to get out of the situation,” Johnson said. “So it’s definitely important to make sure that you can recognize those signs with your animal and remove them from the situation if necessary.”

They said to look to see if your dogs ears are turned down, eyes are big, tail is tucked or if they continuously walk out of the room.

Those signs can be a giveaway that it’s time for your pet to take a break.