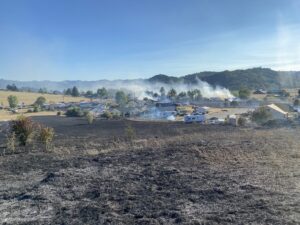 The Rolling Hills Road Fire burned around 20 acres of grass and brush and destroyed 2 homes, multiple out buildings, and 4 vehicles in the Green District.

The Douglas Forest Protection Association, says the fire was contained around 7 pm. It says crews are working to mop up hot spots.

Douglas County Fire District 3, Roseburg Fire, and other agencies nearby all responded.

Earlier, the Douglas County Sheriff’s Office, issued evacuation orders, to the nearby areas. All evacuations have been lifted.

“The emergency has subsided, we are still working with the fire agencies who are in mop-up and we will provide more information as that occurs,” said Sgt. Brad O’Dell, Douglas County Sheriff’s Office.