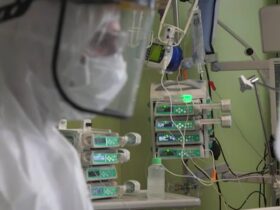 ASHLAND, Ore. – An Ashland woman has been missing since September. Two months later with no leads her family continues to worry.

“It’s a really bizarre feeling not knowing where she is,” said Ashley Waite, Jeannie Perrigo’s sister.

Jeannie Perrigo and Ashley Waite grew up in Siskiyou County. But 7 years ago, Perrigo moved up to Ashland.

“There’s never been a stretch of time that has gone by this long, especially during the holidays,” said Waite.

Waite said her sister is homeless, but always checks in with family and friends.

Something she said is unlike her sister, which has her family worried.

“Her dad is absolutely terrified, which is bizarre to see because he’s such a stoic person and a very calm and understanding person. To see him scared scares you too,” said Waite.

Her sister hopes despite her circumstances people will continue to look for her.

Ashland Police are taking lead on the case. While Jeannie Perrigo is the name she uses, the report is filed under the name Jeannie Martin. If you have any information about the case contact law enforcement.