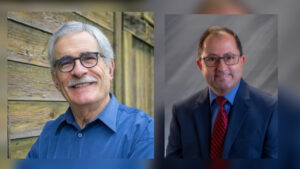 MEDFORD, Ore — Medford Mayor Randy Sparacino and incumbent Ashland state senator Jeff Golden, are preparing to meet in a televised forum in Medford ahead of the November general election.

Golden said they reached out to Sparacino’s team for explanation, including another scheduled forum at the Jackson County Library on October 18th, but said at the time they haven’t heard back.

“What’s useful are those live appearances where voters get to look for themselves, hear for themselves, and take the measure of candidates,” Golden said. “That’s much more useful information than all the ads in the world.”

The two candidates are scheduled to appear in a live forum at NBC5 studios on Monday October 17th. The event will be broadcast during NBC5 news at 6.

“We welcome the opportunity to have an open, fair discussion on policy matters for the voters to be able to make an informed decision this election,” Sparacino said in a release. “Any reports to the contrary are disingenuous. We look forward to our televised forum with Senator Golden on October 17th.”