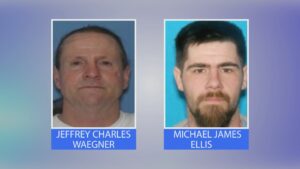 Police say they responded to NE Spalding Avenue for a burglary in progress at 9:30 a.m.

Police say the suspects were taking items from a hemp drying facility valued at over $20,000.

GPDPS says a victim confronted the burglars, who then drove their car towards the victim in an attempt to escape with the stolen property.

His accomplice, 41-year-old Michael James Ellis, was arrested on a parole violation.

Both Waegner and Ellis were taken to Josephine County Jail.

Anyone with information regarding this incident is asked to contact the police at 541-450-6260.