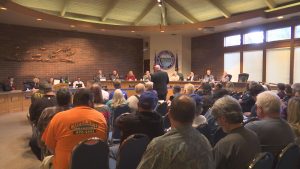 The property has been the site of Copeland Sand and Gravel for 70 years.

The land would be used for a new water treatment plant for those living in the city. The city said the current plant structure is failing and over 80-years-old. The city claims the two couldn’t reach an agreement and is moving forward with the possibility of taking the land through eminent domain.

The city said it’s been in talks with the owners of Copeland Sand and Gravel, the Ausland family, for years. The Ausland’s had hoped they could stay on site for a few years before leaving or continue operating during construction. Last week they told NBC5 News they received an email giving them 180 days to vacate the property.

“Unfortunately it’s led to where we are,” said Steve Ausland Wednesday following the council’s decision. “We could have solved this absent condemnation quite a while ago,” Ausland commented, “…if they’d just been more straightforward about the whole process.”

Ausland went onto say that the offers they’ve received from the city are half of what he believes should be on the table, based off his own research of comparable properties.
He also says that it would be in his business’s best interest if the city would take just the back portion of the property.

During Wednesday’s meeting, those involved in negotiations for Grants Pass explained that at least 5 acres are needed to build a new plant. When some community members questioned why they couldn’t just rebuild, it was explained that tearing down the current plant and rebuilding isn’t feasible as the city still needs an operating treatment facility during construction. City staff said they have discussed taking a portion of the Ausland’s property, but did not reveal if that could be the back portion as the Auslands have requested.

Steve Ausland says they are consulting an attorney to carry out further negotiations. In the meantime, Wednesday’s declaration of intent does not automatically give the city the property. Several studies are still needed moving forward.

We attempted to speak with the city staff for comment following Wednesday’s meeting, but they were unavailable.