“In this community of healing and peace, so I couldn’t think of a better place for them on the river here,” Kathy Donner, family friend, said.

Prayers and stories were offered up, reflecting on two lives cut short.

“Something that shouldn’t have happened for their families. Old people are supposed to die, not your young daughters,” Donner said.

“I could tell you a million things about her. She was the sweetest most soft spoken, kindest gentlest, silly, so goofy, talented. There’s not enough words for her,” Sarah Wilson, family friend, said.

Wayman has also been charged in connection with the disappearance of his aunt, Malina Nickel, back in 2016.

“It rocked our world when Malina went missed three years ago and then to have everything happen that happened in the last ten weeks with closure for Malina, this was something that needed to happen for our community to heal,” Donner said.

Moving forward, friends and family are choosing not to think of the horrific tragedy… But to carry on the legacy of the two women.

“I sincerely hope that we can be shady cove strong and keep that attitude in their name,” Donner said. 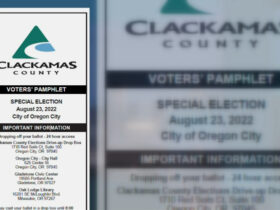