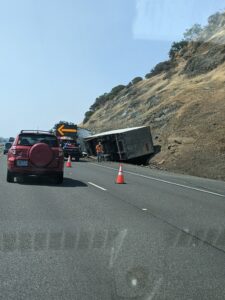 PHOENIX, Ore. — Traffic built up after a multi-car crash near Phoenix.

Both I-5 Northbound lanes were closed for almost an hour before one lane re-opened.

Oregon State Police say two cars and a semi-truck were involved in the crash.

The crash left the semi-truck flipped on its side. OSP says there are no serious injuries.

Police say one person was arrested for a DUII at the scene.

Both northbound lanes opened by 5 p.m.