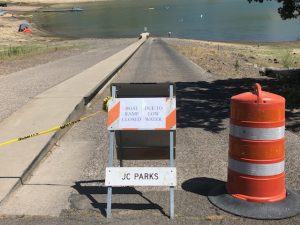 Due to the low water levels and overcrowding in facilities, Jackson Co. Parks and Sheriff’s Office are both asking locals to be patient. The county says there has been an increase in confrontations due to long lines, some have even gotten physical.

“Some of the boat ramps will become unusable and facilities will be a little more crowded. So we remind folks that either find another place to recreate that has a little bit more water or be patient, be calm because the lines will increase,” said Steve Lambert, Parks Program Manager, Jackson Co. Parks.