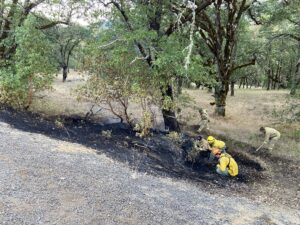 WHITE CITY, Ore. —The Jackson County Sheriff’s Office is investigating multiple fires, that were set on the Fourth of July. It happened on Meadows Road in White City.

JCSO says 5 separate fires were caused by fireworks. They were most likely, thrown from a moving vehicle, and are believed to be intentionally set.

“Thanks to the quick action of the local residents as well as ODF and the Fire District 3 firefighters this did not get out of hand and the fires were able to be extinguished,” said Aaron Lewis, PIO with JCSO.

The Oregon Department of Forestry and Oregon State Police, are helping with the investigation.