0
0 Shares
YREKA, Calif — Klamath National Forest announced Friday that its stopping roadwork on Forest Road 20, after residents raised concerns about the potential impact.
On September 14th 2021, the United States Department of Agriculture approved routine maintenance and repairs of FS 20 road, FS40S30, and FS40s30A (Mt. Ashland Summit).  The project, approved under “categorically excluded,” would have been located on the Oak Knoll portion of the Happy Camp/Oak Knoll Ranger District near Mount Ashland.
District Ranger Roberto C. Beltran who signed off on the order, said he determined that there were no “extraordinary circumstances associated with this decision,” and that the work could begin immediately.
The decision sparked outrage from the community, alleging that the forest was intending to pave gravel roads that would affect the botanical area and bring in more traffic. Local activists Luke Ruediger and Eric Navickas, shared that the roadwork would essentially extend from the rear parking lot at the Mount Ashland Ski Area, to the weather station and Grouse Gap shelter. 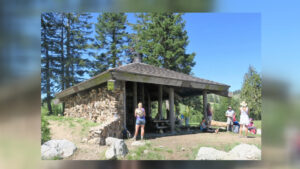 Neighbors add that they were not informed of the project beforehand, and did not get a chance to express their thoughts.
Ruediger and Navickas later filed a lawsuit in Oregon Federal Court against the roadwork. The duo was backed by local non-profit organizations, Klamath Forest Alliance and Applegate Neighborhood Network.
“I think the big issue here is that they’re allowing more people and more use into these sensitive areas, that have a lot of different critical issues.” Navickas told NBC5 on Monday.
Due to the engagement from community members, USDA staff diverted resources to look into how the road was previously maintained. On Thursday, staff corrected records of stating that the road was previously paved and is now, “evident that the road had been traditionally oiled for years, which had created a road surface that looked similar to paving in some sections.”
Smith said they went through decades-old aerial photos, sorted through historical road logs, and interviewed retirees from the 70s and 80s to determine that the road was only paved in certain portions.
“It was after these individual conversations that we were able to confirm that the road has been oiled in the past, but never fully paved, Rachel Smith, Forest Supervisor for the Klamath National Forest, said in a release. ” I am ceasing work on this project effective immediately and will reprioritize the funds to other repaving efforts on the forest.”
Smith acknowledged that it was wrong in the initial decision, and said the public engagement over the past few weeks were helpful and hopes members continue to raise concerns in the future.
The project was funded through the Great American Outdoors Act. KNF says it plans to work with Ruediger and Navickas and other community members, on reallocating the remaining funds from the Forest Road 20 project for other Forest needs.