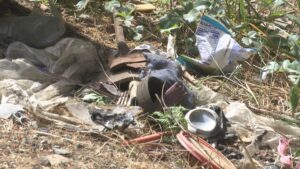 MURPHY, Ore. — 25 people went out into the woods of Josephine County to pick up trash today.

The group is part of a club founded in 1974 called ‘Caveman 4 Wheelers’.

The club’s leader, Misty Sims, says they go around picking up trash in remote outdoor areas 4 times a year.

She says they collected over 15 yards of trash off of Spencer Creek Road.

“They’re wanting to shut this place down because of all the garbage, drugs, abandoned vehicles, and stuff so we’re stewards of the woods and want to keep them open,” Sims said.

The club members removed a toilet, piano, hundreds of needles, and a mattress from the wilderness.