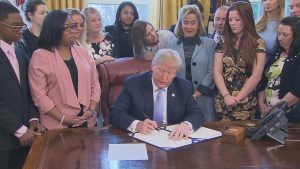 The bill, nicknamed “FOSTA” for “Allow States and Victims to Fight Online Sex Trafficking Act,” gives federal and state prosecutors the ability to hold websites liable for promoting or benefiting from sex-trafficking through the use of ads or forums. It also enables victims and state attorneys general to file suits against those sites.

Local activist and sex-trafficking survivor Rebecca Bender of Grants Pass worked closely with legislators on the bill. She says the law brings internet laws up to date by amending the Communications Decency Act (CDA) that hasn’t been touched since 1996.

“Since 1996, the internet has changed. There are websites that actively sell human beings and those website creators get away with doing it because they claim it’s their right according to the Communications Decency Act,” Bender said.

Bender said the CDA was essentially allowing websites to “host real estate space for traffickers.” Now with the FOSTA in place, these websites can be prosecuted for doing so.

The laws has faced some backlash from critics for free speech infringement. The pro-sex worker community has also spoken out against the bill, claiming that it prevents them from being able to safely screen their clients.

Bender admits that the bill is not without flaw. For her, she is worried that without the internet, it may be harder for law enforcement to find missing people who are being trafficked.

Still, Bender said the internet has helped the sex trafficking business immensely, and if this new law helps to slow it down, she thinks the positives outweigh the negatives.