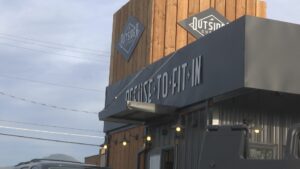 MEDFORD, Ore. – A Medford coffee shop was broken into last night, but a passer-by saved the day.

A man got inside the Outsider Coffee kiosk in Downtown Medford Sunday night around 9:30 p.m.

One of the coffee shop’s owners tells NBC5 a man driving by saw the situation and knew something was wrong.

He scared away the thief, who took off with part of the cash register, which was found earlier today.

“He didn’t have to do that and he did. And because of it, we’re gonna make payroll and we’re gonna stay in business. We could have easily had to shut down today. And for bigger companies that maybe isn’t a big deal. But for us, it’s a huge deal,” said Lindsay McPhail.

The owners said they are grateful for the man who saved their shop. The man got a gift card for his bravery and the thief, we’re told got away with nothing.

Medford Police are looking for the man.