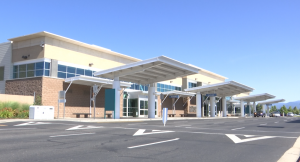 MEDFORD, Ore. — “We had an idea that we would definitely have a decrease in traffic, but I don’t think anyone had any idea it would be as significant as it was,” said Jason Foster, air service and economic development manager for Rogue Valley International-Medford Airport.

A deserted airplane and empty TSA line, a once scary thought for airports across the country, became a reality at the start of the coronavirus pandemic.

“As soon as the shelter in places orders came down about mid month, everything kind of halted… and that’s definitely reflected in our numbers for March,” said Foster.

Foster says passenger traffic is 15 to 20 percent what it was this time last year.

That’s still a significant increase from a few months ago when traffic was 6 or 7 percent compared to the year before.

Come April, traffic goes down by more than half to over 6,000 passengers; the airport’s lowest passenger flow since 1979.

By May, things steadily increase to over 15,000, no where near the over 93,000 passengers at that time the year before.

“I hate to say it’s 100 percent increase each month but we’re really seeing that much of an increase month over month from when we were at the bottom of this,” he said.

Today, Foster says it’s encouraging to see people back with passenger flow expected to be 30,000 this month.

However, they still have a long way to go.

“We will at some point get back to our numbers that we saw last year, it might take a year or two or it might take longer… but we’re heading in that direction,” Foster said.