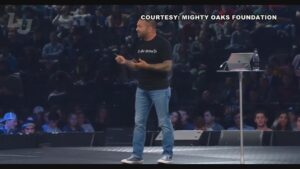 MEDFORD, Ore. — A nationally-known marine combat veteran visited Medford Sunday to speak to veterans at a church service and an outreach group.

Chad Robichaux served 14 years in the marines and is a former professional mixed martial arts champion.

He founded Mighty Oaks Foundation, a non-profit organization helping military and first responders throughout the country.

Heritage Church hosted Robichaux because of Medford-native, Terry Haines, who reached out to Mighty Oaks looking for help for local vets.

“Since 1775, our veterans have fought and bled and died to preserve our freedoms and that’s still going on today,” Robichaux said. “There are troops still being deployed around the world today, preserving our freedoms here and so we should honor that by honoring these warriors who are struggling and help them get back on their feet and integrate back home to their communities.” he added.

“I think life is a fight, you know, we fight for everything. The minute you wake up in the morning, you’re fighting for something. Especially if you’re a person of faith like I am, every day is a fight and we need to ready to be engaged in it and ultimately find the victories in our life,” Robichaux said.

Robichaux is a bestselling author who has written five books related to veteran care.

He is going to compete twice in March in Brazilian Jiu-Jitsu in Texas.