“I love being from a small town and being able to do something like this, it’s really cool,” said Foltz. ‘Really cool’ might be an understatement though. The team took first place in the multi-block competition. “In the past years, we made sculptures that were pushing 30 feet tall and 30 feet wide. But as far as the amount of ice that was suspended on four legs, I’d say this is the biggest one,” he said. 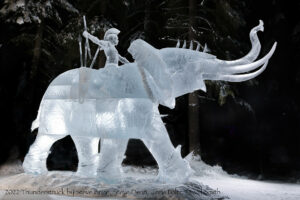 While this wasn’t his biggest ice sculpture, it sure had a big impact. Foltz doubles as a culinary arts instructor at Southwestern Oregon Community College’s Oregon Coast Culinary Institute and brought a few of his students along. “I was able to get them some exhibition carving up here in Alaska, and me at the same time competing! So I think the coolest thing was for them to have their teacher win.”

Foltz has been ice sculpting for about 15 years and is now a certified master ice sculptor and a certified ice sculpture instructor. He says the support he’s received in North Bend and Coos Bay is incredible.