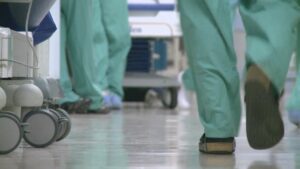 PORTLAND, Ore. – COVID 19 hospitalizations are expected to continue to decline in Oregon.

The university said because the number of people who are susceptible to the virus is shrinking, we will see fewer hospitalizations.

This new forecast says that hospitalizations will decrease to 300 statewide by March 18th.

“The forecast going forward looks still like it’s going to decrease even further now we are seeing that in other states and in Oregon the immunity level is high enough from vaccine and previous infection that we are not seeing a new wave,” said OHSU’s Peter Graven.

Graven says that about two-thirds of Oregon’s population has already been infected with the virus at some point.

He says that unless another variant breaks through existing immunity there are no severe waves of illness forecasted for the near future.