MEDFORD, Ore — Medford Parks and Recreation Department is moving forward with plans to create a roundabout next to the soon to be built “Rogue X” sports complex.

What’s described as a “compact roundabout”, is proposed to be located along OR-238 (Jacksonville Highway) and Cheshire Way.

According to a document sent to NBC5 – a compact roundabout would reduce approach speeds at the intersection, allow pedestrians to cross two lanes of traffic, and is “statistically the overall safest intersection control option.” 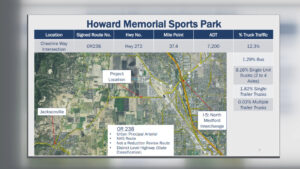 Rich Rosenthal, Parks and Recreation Department director, said it considered four options including a standard 4-way intersection with a traffic signal, before deciding on the roundabout.

“The roundabout addressed the most concerns and issues with the amount of traffic there,” Rosenthal said. “We also recognized the amount foot traffic, bicycle traffic, and vehicle traffic that would be coming and going from that recreation area.”

The City of Medford planning commission greenlighted the project, and is now waiting approval from the city council and an inter-governmental agreement. It’s expected to be discussed next year, and would be built in time for the opening of the new center in late 2023.