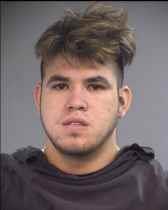 MEDFORD, Ore. — A leader of a southern Oregon drug trafficking organization is sentenced to 135 months in federal prison for distributing methamphetamine and heroin in the Klamath Falls area, according to U.S. Attorney for the District of Oregon.

Southern Oregon law enforcement began investigating a drug trafficking organization led by 24-year-old Rogelio Gomez-Arias, in May 2018, according to court documents. The organization reportedly worked with an individual in Mexico, who sold him drugs for money and firearms. The drugs were to be transported to west coast cities, according to the district attorney’s office.

On July 30 of this year, Gomez-Arias pleaded guilty to conspiring to distribute and possess with intent to distribute methamphetamine. His co-conspirators, including 23-year-old Alexis Chavez-Franco, 36-year-old Domingo Matias-Hernandez and 62-year-old Juan Rodriguez-Ramirez are in custody waiting for trial. 35-year-old Irving Beas Ceballos is on pre-trial release.