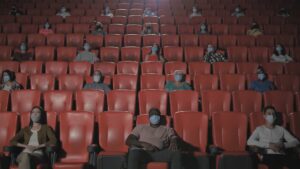 MEDFORD, Ore. – Oregon is fully reopening, which means many businesses are going back to normal.

Gyms are just one industry in the Rogue Valley that’s lowering restrictions as Oregon reopens. That means facilities can fully open. At Club Northwest in Grants Pass, they are fully opening. That means no capacity limits or masks for members. The only thing they don’t have is towel service, but the club says it may be bringing that back in the future.

Coming Attractions, which owns Ashland’s varsity theatre, Southgate Cinemas in Grants Pass, and Pelican Cinema in Klamath Falls are all fully reopening. That means instead of 20% capacity limits it can go back to 100% capacity. Plastic barriers are also coming down. Masks are optional.

“With the limiting openings proving to the public that we can be safe and they can be comfortable coming back to our locations. So far so good,” Mark Murin, Director of Operations for Coming Attractions.

Murin said they’ll be adding more movie times. Even with the restrictions going away, they’ll still keep cleaning a priority.