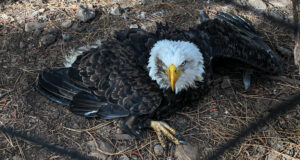 KLAMATH FALLS, Ore. — Some wild animals in Klamath Falls are suffering from lead poisoning, according to a wildlife rehab center in the area.

Liz Burton, the founder of the rehab center, says they test every bird and scavenger that comes into their facility.

She says around 80% of hawks and owls have lead in their systems, with 100% of bald eagles tested showing ‘measurable’ amounts of lead. She says hunters using lead ammunition, anglers using lead weights and farmers using lead scatter shots to scare birds off are causing these wildlife to suffer.

Burton adds that a fragment of lead the size of a grain of rice, around 100 micro-grams of lead, is enough to kill a bald eagle.

“[The animals are] ingesting these little scraps of lead in the scraps or gut piles, then, because their stomach acid is very acidic to help them breakdown what they eat, [it] actually breaks down the lead quickly and sends it into their blood stream,” said Burton.

She says testing the animals for lead costs $10, with treatment totaling around $100.

This year alone, 14 raptors have died from lead poisoning and the facility has treated and cured 25.

She believes the lead poisoning has been going on for awhile and many people have not been aware of the problem due to a lack of testing.

She encourages people to stop using lead ammunition to spare the health of wildlife.